Martyn said “Bringing the Festival Marquee to Babbacombe Downs is a lot of work but also enormous fun and a very satisfying experience.  We now work with a number of local groups and businesses, as well as Torbay Council, and together put on five days of great entertainment in the hope that locals and holidaymakers will come and enjoy themselves. We believe that the mix on offer provides something for everyone. The aim is to present a selection of events that ensures we can cover the substantial costs of putting such a marquee up as well as some that can then raise a significant amount of money for various charities.  I believe it’s now an important fixture on the calendar of most people in Babbacombe and the surrounding area and I hope it’s something that we can continue to provide.”

The charities that benefited from the Festival Marquee this year include £7360 raised by the Torbay Holiday Helpers Network (THHN), £1030 raised by June and Bryan Batchelor and their team of cream tea helpers for CLIC Sargent and Rotary raised £2500 for Children in Need at their Proms Night and gave a further £800 to Help for Heroes from money raised from their fabulous BBQ in the marquee which did particularly well on Armed Forces Day feeding the hungry hoards. 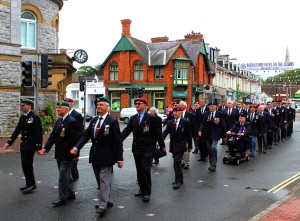 Luke Tillen, founder and Chairman of the THHN said “To have raised over £7000 during the Festival is absolutely fantastic.  This figure is the result of all sorts of fundraising, donations and some wonderful sponsorship from lots of people including Babbacombe Garage, WBW Solicitors, Riviera Mortgages and South West Water and, of course, David Hanbury who made us the chosen charity for his wonderful Fish and Chips on the Downs Music Day.”  Luke added “I was actually away for a lot of this year’s events as I was doing a bit of fundraising of my own running an ultra-marathon in Cumbria so the lion’s share of the work was done by our fantastic Fundraising Manager, Brilliant Brian Lewis.  Brian worked tirelessly to organise all the details, he attended all of the events and without him there’s no way we would have raised anything like that amount of money.  He was also at all the events talking to people and explaining what the THHN does which is so vital for us.  Obviously Brian was helped by a wonderful band of volunteers who I am incredibly grateful to.”

The five days of events started with the traditional Rotary Fayre up on Babbacombe Downs when the marquee was used as the Refreshment Tent. The Rotary Fayre on the Downs is of course another event that enables lots of groups to raise money for their own causes with totals reaching over £20,000 each year.  A wildlife presentation was given by award-winning film-maker Andrew Cooper on the Wednesday evening. Thursday saw the marquee filled with an exhibition by the Babbacombe and St Marychurch Local History Society where visitors were given the opportunity to delve into their family history with help from the Devon Family History Society.  Thursday evening and the marquee was once again used by Babbacombe and St Marychurch Rotary who hosted their fabulous Proms Evening.  Friday and the marquee was filled with people enjoying a delicious cream tea until the marquee was transformed into the venue for a traditional German Oompah Night with some great entertainment and yodelling competitions to boot! Saturday was the ever-popular Armed Forces Day.  The weather was a little damp but spirits certainly weren’t.  Thousands turned out to cheer the Veterans’ Parade, wander around the stalls and soak up the atmosphere.  HMS Brocklesby was anchored in the bay and 300 people got tickets to sail out and tour the ship whilst it was visiting. Many of the crew were able to come ashore and meet the public as well as attend the Party Night that was put on in the Marquee on the Saturday evening.  Every member of the crew was also treated to takeaway fish and chips, courtesy of David Hanbury, who had meals, literally, shipped out much to their delight. 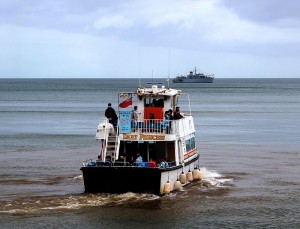 It was then fish and chips all the way on the Sunday with the Hanbury’s Fish and Chips Music Festival on the Downs bringing this busy five days to a close.  David said “I can’t thank everyone involved enough.  From all the bands and performers who ensured we had constant entertainment for 10 hours, to all my wonderful staff who worked so incredibly hard as well as every single person who came along, bought fish and chips and made the day such a success.” 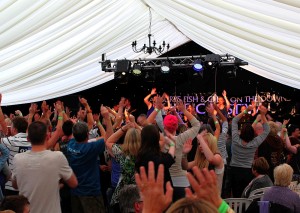 If you were at any of this year’s Festival events go to www.babbacombefestival.com where there is now an on-line gallery and who knows, you might just see yourself on there.  For those who didn’t attend, have a look anyway and see what you missed.

For now, it’s back to the day jobs for all those involved.  Martyn said “We are already talking about next year.  Babbacombe Downs is a very important place to all of us involved with the Festival Marquee and ensuring that we put on events that have wide appeal and are safe and fun for all concerned is vitally important to us.  We hope to bring everyone a great line-up in 2014 but, for now, watch this space!”

All photography used in this article is by Gemma Cooper.