Tuesday 23 October was a big day for Hanbury’s of Babbacombe. They were celebrating 30 years of Hanbury’s takeaway and ran a special offer selling cod and chips at over 30% off. Now that was quite a treat for the customers but, as if that wasn’t enough, David Hanbury decided to give all the takings on this special day to Rowcroft Hospice as part of their Dine at Mine campaign.

With the takings from the takeaway and some generous donations from customers the whole event raised over £3,500. 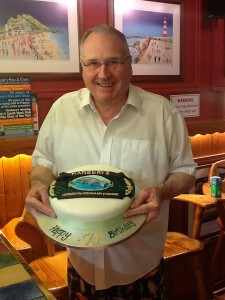 David said “I’m extremely pleased with how the day went. Word seemed to have spread about the event. We were busy from the moment we opened at 11.30 in the morning and the people kept arriving until we closed at 9 o’clock that evening. We served around 1,000 portions of fish and chips that day. As you can imagine, it was pretty hectic.”

David had taken the decision to shut Hanbury’s restaurant next door to the takeaway in anticipation of needing all hands on deck to cope with demand.

Hanbury’s has a history of raising money for Rowcroft and, when David came up with the idea of a special birthday event, he was keen to provide not only a great offer for his customers but also to help a charity he feels provides a vital service in the local area.

Hayley Norrish, Community Fundraising Officer at Rowcroft, said “We’re absolutely delighted with how much Hanbury’s has raised as part of Rowcroft Dine at Mine campaign. The local community showed great support for Hanbury’s and in turn have helped to raise a fantastic amount towards patient care.” She added “We would like to wish David another very successful 30 years.”